PSKoi is owned and operated by Russell Peters. Mr. Peters is a member of Shinkokai, US Chapter.

PSKoi has been in business since 1999.

Since the business started it has been his goal to find the best quality Koi available in every price range. With this in mind Russell began going to Japan in 2002 and from his first trip to Japan he began to develop a personal relationship with Shoichi Hosokai of Hosokai Koi Farms. Within a couple of years Shoichi’s son Masaru took over Hosokai Koi Farm and the relationship developed on a whole new level. Shoichi Hosokai was now free from most of the duties on the farm and began to introduce Russell to many of the breeders in the Ojiya area. Relationships have been developed with Torazo, Abe, Otsuka, Marusada, Hiroi, Sekiguchi, Kase, Dainichi, Marusei, Hasegawa, Jirosuke, Hoshikin, Teradomari, Maruboshi, Koda, Kaneko, Matsunosuke (Yamamatsu), Choguro, Suda, Izumiya, Isa, Aoki, Mano and Shinoda.

In 2005 Shoichi gave Russell an introduction to Toshio Sakai of Isawa Nishikigoi Center. This introduction led to PSKoi becoming the US Dealer and Agent for Toshio Sakai (INC). Toshio Sakai is also know as “Matsunosuke” and he has been responsible for many of the improvements in Koi that have led to many of the standards of the day. Toshio Sakai is known as the “Innovator” and has been passing a long a lot of his knowledge to Russell. This relationship, and knowledge, has allowed Russell to have access to some of the best Koi available. As the relationship has developed with INC Toshio Sakai’s son Toshi has been coming into his own. With this, Russell has been developing a relationship with Toshi that will bring more good things. 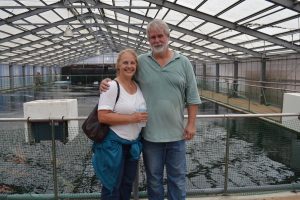